A Definition of Wrought Iron

Wrought iron, also known as “mild steel”, is an iron alloy which has a very low carbon content and contains iron silicate or “slag”. Slag are tiny fibers that help the metal absorb stress without breaking and also grants wrought iron a grain similar to natural wood. Wrought iron has figured heavily through the years in architectural design elements, fences, garden gates and trellises, gazebos, stair railings, and window grills; from bridges to fireplace pokers to railways. It is sturdy, pliable, malleable and easy to weld, making it the perfect medium for the elegant designs you find in wrought iron patio furniture. Before steel was available in large amounts wrought iron was widely used by manufacturers of everything from heavy ironclad warships to simple nails. Today true wrought iron is extinct, replaced by the mild steel mentioned above, yet is still called wrought iron since it is worked by hand ("wrought" means "to work"). Contemporary wrought iron that utilizes mild steel is stronger than its solid predecessor, and significantly stronger than cast iron. 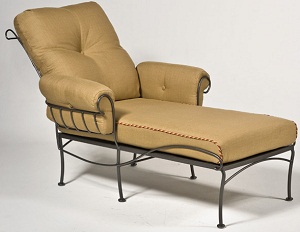 What to look for when shopping for wrought iron patio furniture:

CLEANING: Wash or spray with clear water or mild soap and water to routinely remove dust, chemicals, pollen, salt, dirt, etc. Do not utilize any abrasive cleaners or power washers.

Scratches and chips should be touched up immediately to prevent corrosion and rust formation. If rust has formed, sand the area with a fine grain sandpaper or steel wool pad. Wipe with a soft cloth to remove any debris. Use spray paint; hold the can 10 inches away from area to be treated and spray with several thin coats, allowing enough time between coats for the paint to dry.

If you purchased your wrought iron furniture from a specialty shop, they should provide paint that has been distributed by the furniture manufacturer. You can also use Rustoleum to touch up your furniture.

NOTE: Ideally, wrought iron should be stored in a dry storage area. If this is not possible, store the furniture in a covered area that protects it from snow and harsh elements. It is not recommended that wrought iron furniture be covered with traditional patio furniture covers, as moisture can get trapped under the cover and contribute to rust and oxidation. There are breathable patio furniture covers that can be purchased if necessary.

TIP: Maintain or restore the luster of the powder-coated finish of your wrought furniture by applying a coat of clear liquid car wax once a season.

Wrought iron has universal appeal. This is furniture you will find gracing the lawn of a plantation, clustered in the shade of a gazebo or set on Grandma’s porch. It has a time-honored appeal that never goes out of style. However, this furniture has changed dramatically in style and form over the past few years. Modern silhouettes, colors, styles and more comfortable designs keep wrought iron furniture as popular today as it has ever been.

Wrought iron has a sturdy reputation. Despite the fact that wrought iron can rust, it has always had a reputation for being extremely durable, which makes it a perfect choice for families with young children.

Modern wrought iron has rust inhibitors. Higher quality wrought iron furniture utilizes a rust prohibitive zinc primer prior to finishing in order to arrest rust. When rust does appear, it can be easily sanded away without compromising the integrity of the frame. A fresh coat of paint restores the furniture to its original state.

Wrought iron is great for sidewalk cafes and coffee shops. Wrought iron furniture is often the choice of commercial venues because it is economic, extremely heavy and nearly indestructible, yet simple to maintain.

The History of Wrought Iron 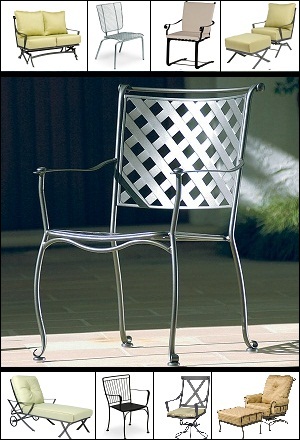 Throughout recorded history, from Europe to China, historians, writers, scholars, scribes and others have repeatedly referred to iron. Iron, the raw material, was produced through a broad array of smelting processes, which differed depending on location and time.

The locations where these processes occurred are currently referred to as "bloomeries", since the hardware and methods varied slightly from each other, yet produced the same results. The bloomery process involved combining charcoal and iron ore, which was then lit by fire. Once heated, a tuyere (a tube or pipe) supplied air to cool the combination to just below the melting point of the iron ore.

Slag (silicate) would melt and be forced or allowed out of the bloomery while the charcoal would reduce the ore to iron. The solid iron had just passed through a process called smelting, and was gathered into a solid, spongy mass called a bloom. The bloom was composed of not only iron, but also slag, which had to be worked and forged to both shape the iron and remove some of the slag.

This type of iron forged from a bloomery is termed sponge iron. The Chinese may have smelted iron using this process (pictured above right) as early as 3,000 B.C.E., but historians note that early bronze smiths were unfamiliar with the metal, so the focus remained on bronze. Bronze is easier to produce than iron, requiring a less complicated process. That changed sometime around 1,200 B.C.E., when a shortage of copper and tin reduced the amount of bronze available for weapons and other hardware.

Bronze smiths turned to iron, ushering in the Iron Age from the Bronze Age. Evidence suggests this occurred first in Anatolia around between 2,000 and 1,200 B.C.E. and iron metallurgy seems to have exploded from 1,200 to 1,000 B.C.E., with evidence of bloomeries surfacing through the Middle East, Africa, Europe and Asia. By 800 B.C.E. bloomeries began to appear in China, which would eventually be abandoned by the Chinese in favor of efficient blast furnaces by the 5th Century B.C.E.

In Medieval Europe, staring in the 5th Century C.E., bloomeries began to appear. These early bloomeries were small, producing relatively small amounts of iron. The introduction of waterwheels to the bloomeries allowed them to increase in size and scope; this also allowed the iron to be heated to a point in which it began to melt, producing molten iron.

This molten iron was unworkable pig iron, and was avoided until blast furnaces began to appear. The process of producing iron from a blast furnace was long and drawn out, and would result in various forms of iron and steel, from low carbon iron to cast iron to natural steel. In this process a master smith combined mild steel and wrought iron, and the amounts of each determined the characteristics of the resulting iron.

Sheets were produced, which then received additional wrought iron or mild steel. The sheets were then folded and pounded back into sheets. This process was repeated until the desired brittleness, toughness or softness was achieved; bloomeries remained in Europe until the 1800s in Spain and France.

A major advancement in the process of wrought iron was the introduction of the blast furnace, which allowed the production of pig iron (pictured right is pig iron being cooled with water), the raw material needed to produce commercial-grade iron and steel. Blast furnaces first originated in China around the 5th Century B.C.E. and by the late 1500s began to arrive in England.

Potting and stamping emerged in the middle 1700s, a process that produced bar iron without charcoal, promoted by several inventors including the Wood brothers, John Wright, Joseph Jesson and the Cranage brothers. This aim to remove charcoal from the process accelerated in the Industrial Revolution of the 1800s, with several patented processes being invented.

The most well-known innovation was the puddling process, invented in 1784 by Henry Cort. Puddling (pictured left is a schematic of a puddling furnace) successfully heats the metal without having it come into contact with the charcoal fuel, thus assuring no charcoal impurities are present. The pig iron first had to be refined to remove silicon and other impurities, and after the puddling process further impurities were removed through a process called shingling.

The blooms were then rolled into grooved rollers, producing flat bars called puddle bars or muck bars, due to their poor quality. They were then chopped up, intertwined together by wires, and then reheated and rerolled, over and over again until the quality of the iron sought was achieved.

Steel had been known since antiquity, but was impossible to produce in large quantities until the invention and refinement of the blast furnace and finery process. Starting in the middle 1800s this changed as steel began to replace traditional wrought iron. Historically steel carried high amounts of carbon and phosphorus, thus making it brittle and prone to shattering.

The puddling process removed the charcoal from the equation, and the resulting steel was stronger and less brittle. By the early 1900s steel had replaced iron in most settings, and iron's rapid decline accelerated in that century. By the 1960s steel production costs had dropped significantly due to several innovations including the Ashton process, further depressing the use of iron.

The last true wrought iron plant in the United States closed in 1969. The last plant in the world, the Atlas Ironworks of Thomas Walmsley in Bolton, England, closed in 1973. Currently the only wrought iron available is produced by small, local contractors from recycling scrap wrought iron. Today products considered "wrought iron" are actually wrought steel, retaining the name since the steel is still worked by hand, or "wrought".