Ho-Ho-No! The Origins of Santa Claus

Long before Coca-Cola featured that fattened up Santa in the red fur suit, Santa’s prototype Saint Nicholas was doing his thang in 4th century Turkey. The man was a monk, and it’s very doubtful that his belly was shaking like jelly. He did, however, spend a lot of time in prison for defending his faith against Roman persecution.

So how did this imprisoned and impassioned monk become Jolly Ole St. Nick?

For starters, there is a myth about the man that may sound familiar to you. Nicholas purportedly saved three young girls from a life of prostitution (that’s not the part that should be familiar, btw) by anonymously filling their stockings, which were hung by the fireplace to dry, with gold. In a painfully anti-feminist twist, their father used the money to marry them off, but that’s neither here nor there.


Another story about Nicholas (it’s a bit gruesome) is that he went into an inn and had a vision that the innkeeper had murdered three boys, chopped them up and put them in pickle barrels. Nicholas was able to resurrect the children, hopefully intact.

Stories like these gave Nicholas the title of patron saint of children, and Saint Nicholas Day, which is still celebrated on December 6, was the day children would traditionally put out their shoes so he could fill them up with treats. This eastern tradition, which started roughly during the 6th century, had become popular in the western world by the 10th century. (Side note: the bones of Nicholas were stolen by some Italian sailors during the 11th century and he has rested in Italy ever since.)

Two centuries later, the Protestants came on the scene, there was a reformation, and, in most of Europe, saints like Nicholas became sidelined for a great deal of the population. To continue the practice of surprising their children with sweets and treats in their shoes, the job of delivering presents became the baby Jesus’, aka the “Christkindl” (did a lightbulb go on? Come on, you can get it…Christkindl…Chris….tkindl…almost there…Kris Kringle! Yay!) This now winged infant took on the delivery job, accompanied by Nicholas, or someone very like him. The date of delivery changed from December 6 to Christmas Day, December 25.

The celebratory customs surrounding St. Nicholas, or Sinter Klaus (now that one is super easy…Sinter Klaus, Santa Claus…) never completely died out; Saint Nicholas day, December 6, remains a feast day in the Catholic calendar and many countries still observe it by children putting out their shoes for treats. Norse countries, in particular, kept these traditions alive and many of our ideas about Santa Claus arose from the metamorphosis he took in those Scandinavian countries. Legends about traditional Norse gods intertwined with the stories of Saint Nicholas and soon he had taken on a white beard and was traveling through the sky in a sleigh pulled by a team of goats ala Thor. And, like Odin, he was eking out rewards and punishments through chimneys or fire holes.

In 1822, the poem “The Visit of Saint Nicholas” was written by Clement C. Moore. We know it more familiarly as “The Night before Christmas.” In the poem, the formerly ascetic saint wearing red robes has completely morphed into a jolly fat man wearing red fur. Moore also got rid of the goats and put reindeer in front of the sleigh. Moore essentially created a hybrid of that new and improved Scandinavian super Saint Nicholas with a legend, popular in Germany and some other countries, that fur-wearing gnomes accompanied the saint to whip the kids that didn’t make the “nice” cut. 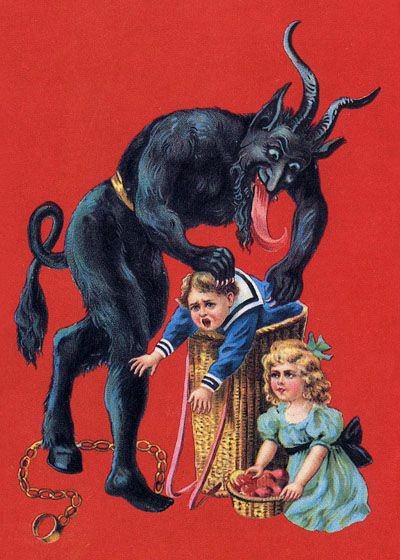 Speaking of the Germans, they also originated the legend of the anti-Nicholas in the form of Krampus. They really wanted to stress that naughty or nice idea. Krampus has enormous horns and cloven feet and he carries a chain with bells and a bunch of sticks that he uses to punish naughty kids; the really bad ones get drug down to hell. Fa-la-la-la-la.

St. Nicholas Day and Krampus Night both occur on December 6, the day that children traditionally leave out shoes for rewards…or punishments, if the shoe fits.

Krampus fell out of favor for several years for various religious and political reasons. But now, in the 21st century, he’s BAAA-AACK, thanks to Hollywood. Considering the decidedly sour feeling that some have about the annual Christmas spend-fest and the greedy children who tear ungratefully into gifts on Christmas morning, Krampus might be here to stay. Go Krampus!

So our well-loved and familiar Coca-Cola guzzling Santa, with his red suit, fat cheeks, jiggly belly, twinkling eyes, magical reindeer and house-breaking abilities traveled a long, long way, through the centuries, from Turkey, via Italy, through Europe and finally on to the good ol' US of A.