Luxury for a few may involve loading Louis Vuitton luggage into a Lamborghini, checking the time on a Piguet wristwatch and getting into that first class seat for a flight to Abu Dhabi and a couple of weeks in a suite at Emirates Palace. But luxury for everyone is a warm, bubbling, oh-so-relaxing hot tub.

Hot tub spas are available for every size and budget need and will turn any space into an opportunity for lavish indulgence. This is a place to calm down, to take a breather, to settle back and to spend some quality time with significant others. Hot tub spas serve a practical purpose as well; there are health benefits like improved blood circulation, pain and stress relief and focused hydrotherapy. 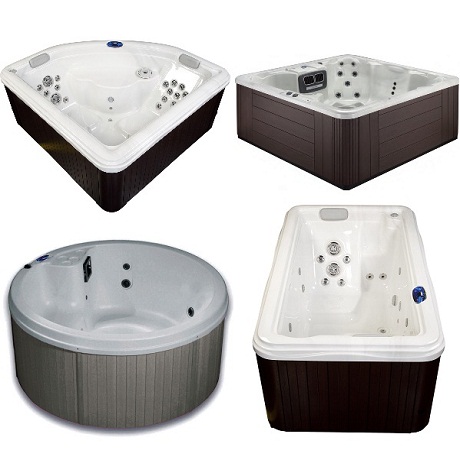 So what’s the difference between hot tubs, spas, Jacuzzi® and whirlpools? And does it make a difference which one you buy? First of all, Jacuzzi® is simply a brand, like Kleenex. It has become a name synonymous with spas, but like every tissue is not a Kleenex, every spa is not a Jacuzzi®. The term “hot tub” is often used to describe tubs made of wood; “whirlpool” describes the swirling action of the water and is frequently used to describe a jetted bathtub. The theories for the origins of the word “spa” are varied; most believe it is derived from the town of Spa in Belgium, where natural hot springs have been drawing visitors since the 14th century. I like this version: it comes from the Latin; salus per aquam…get it? Salus Per Aquam…SPA…which translates roughly “health through water.” Wherever the word came from, the word “spa” and the phrase “hot tub” are now both comprehensive terms which have evolved to define any heated, jetted tub.

It’s the heat and the jets that make the spa special and which give it the qualities that make owning and using a spa a great choice on many levels.

Spa shells are constructed by either vacuum forming, where a sheet is placed over a mold and heated while a vacuum pulls the sheet over the mold, or rotational molding, where a polyethylene powder is placed in an aluminum mold in a large oven, heated and rotated so the melting plastic takes the form of the mold. Contemporary spa shells are similar to boat hulls in both materials and production methods. Avoid moving hot tub and spa shells long distances; if a hot tub shell is cracked or damaged it must be replaced. 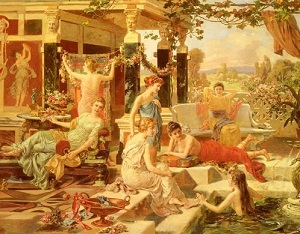 The History of Spas & Hot Tubs

The benefits of balneotherapy (the treatment of disease through bathing) and hydrotherapy (the treatment of the body through hot water) have been known since prehistoric times. Areas holding hot springs were popular destinations in the ancient world, and quite a few hot springs located in Europe offer archeological evidence supporting this claim, with Bronze Age items being found.

Treatment at springs could involve more than just hot water therapeutic dips. Iron deficiency could be treated by drinking the mineral-rich water found in many of these springs, a common problem amongst ancient populations. Areas offering chalybeate spring water, or water rich in iron, were quite popular throughout history around the entire globe.

The Greek and Romans were known to love hot spring water, and the Greeks are credited with documenting some of the first examples of both balneotherapy and hydrotherapy. These public baths (pictured left is a Roman bath) were more aimed towards personal cleanliness, rather than therapeutic treatment.

Traditional Greek mythology always pointed to hot springs and tidal pools as places of healing, with the healing properties typically attributed to the gods. Thus, many facilities were established surrounding tidal pools and hot springs, built for individuals looking for effective ailment relief or cures of disease. The Greeks would cut bathhouses into the side of hills where hot springs spouted, containing the healing water for treatment; the Spartans were known to have created vapor baths for treating a variety of sicknesses.

Since Roman society was copied from Greek society, naturally the Romans loved hot springs and bathing in general, constructing both public and private baths. The Romans effectively used their technology to improve the experience; cement and aqueducts allowed for advancements in the area of hydrotherapy. Baths could be found in major Roman cities as well as in colonies such as Spain and England. A few examples of Roman baths built around hot water springs include Vichy, France; Bath, England (pictured right); Baden, Austria and Aachen, Germany.

This society relied on these baths to relieve skin ailments, arthritis and rheumatism, amongst many others health issues. When the Roman Empire fell into decline after the death of Emperor Constantine in 337 C.E. many of the Roman bathhouses in colonies were abandoned during medieval times. 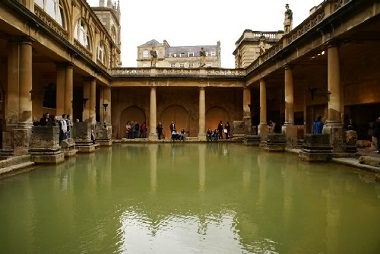 By this time bathing was considered a dirty practice by authorities that led to immoral behavior and the spread of disease; thus, many bathhouses in Europe were left to ruin during this period of time. But the knowledge of hot water therapy continued, though suppressed, with many tales arising of knights seeking sacred wells and holy springs during this time period. These hot water spring destinations were considered designated by God to cure human ailments.

In the early 1300’s hot springs were discovered in Spa, Belgium by Collin le Loup, and a health resort was created around these curative waters. Today the term “spa”, for both day spas and hot tubs/spas, derives from and refers to the health resorts found in this Belgium city. In the early 1600’s similar water therapy locations exploded across England, with various resorts opening promoting the curative waters found in the countryside. Over the course of this century the upper class began to focus on bathing for health reasons, since previously medieval Europeans had only washed their face and clothes.

Resorts and clinics were created across England and spread throughout Europe during the 1800’s. Places such as Bath noticed large hotels being prepared for the increase in guests from cities such as London. Guests were encouraged to bath and drink the water, and educational lectures and other forms of entertainment were also present at these locations. 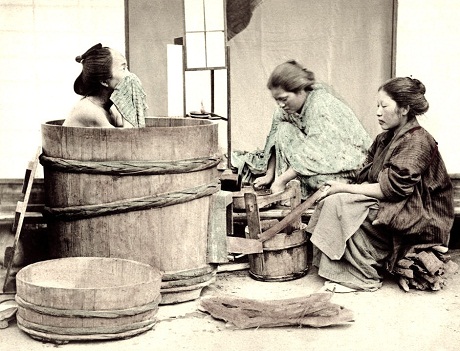 By the late 1800’s it was universally accepted that bathing and cleanliness brought many health benefits. Guidebooks began to be published, and wealthy Europeans and Americans relied on them to find the best spas on both sides of the Atlantic. From these traditions was passed down the public day spa experience, as well as some aspects of the hot tubs and spas we use today in the privacy of our backyard or home.

In a large part the private hot tub or spa found in the American backyard is tied to the Japanese ofuro. These forms of round wooden hot tubs started appearing in the 1940s and 1950s, mostly in California. Historically the Japanese used these special bathtubs with hot water to relax and warm the body during cold weather. Pictured left is a Japanese male sitting in an ofuro, identified as a samurai, cleansing himself in a ritualistic fashion while two women are seen stoking the fire and performing other duties. Pictures of men in ofuro are rare, with a majority of surviving images depicting Japanese women, typically geishas.

For the Japanese, using these baths was more of a ritual than a cleansing routine, and hippies in the 1960s continued this "ritualistic" experience, sometimes involving recreational drugs. Since the 1960s the popularity of this relaxing process has extended across America and across all demographics, with many homes now offering a private "hot spring bath" in their backyard or basement. Thus, the typical backyard hot tub or spa experience is a combination of both Eastern and Western cultures and influences, with many aspects of this practice being copied from European and Asian traditions. 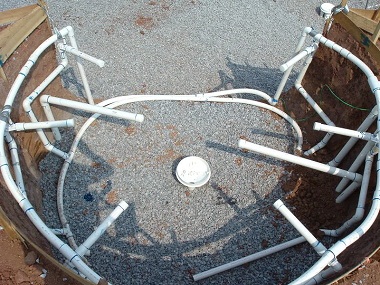 Each hot tub offers many systems that serve separate purposes. Here's a breakdown of these systems:

Several methods for sanitizing a spa or hot tub can be used for owners to prevent maintenance issues and provide clear water for the users. Pumps and filters (the Artesian Spas Micron Filter is pictured right) are standard for hot tubs and spas, along with chemical treatments of bromine, chlorine or other sanitizing minerals; the combination of filtering and treating the water with minerals is recommended by the hot tub industry. In addition to these two methods, ozone generators, UV filters and ion generators are effective supplements to filters, pumps and chemicals. Like the water in a swimming pool it helps to “shock” the hot tub or spa water with granulated chlorine or a potassium compound to prevent cloudy water and avoid the heavy chlorine smell associated with indoor swimming pools. 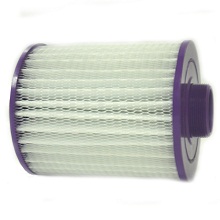 Testing the water for appropriate levels of pH, calcium content and alkalinity is recommended (pictured right is the TruTest Digital Test Strip Reader by Hach). Digital readers and traditional test strips exist for evaluating your hot tub water. pH is the measure of acidity in the water, which in high levels can prevent chlorine from working effectively. If large amounts of calcium is present the plumbing may corrode, or mineral deposits may appear in the water heater. Alkalinity grants you the ability to control the water's pH levels.

Artesian Spas - Manufacturer of the Island Series and Platinum Elite lines of hot tubs and spas, Artesian offers everything from large 10 person spas, down to two person spas with innovative features such as row bars and swim training systems.

Viking Spas - Find a variety of shapes (round to square models) and sizes (two person up to eight person models) with this manufacturer, who offers the desirable Destiny River line of hot tubs loaded with special jets, power systems and other options.